One of the toughest things about being the first in a given field is that there is so little data available for testing against.

As the only Indian company manufacturing ePTFE (expanded PTFE) gasket tapes, we are constantly met with questions regarding how the properties of our material hold up against those of competing brands operating in Europe and the USA. However, since the material is so new, there do not exist any established testing standards locally for us to check the product.

To counter this, we initially took up the task of importing tapes from other manufacturers and testing the tensile properties and specific gravity against the same. Initially, we were trying to answer only 2 questions:

Although we were happy with the properties of our material, there were still gaps in our understanding. Most notably, what were the other properties we should be testing? And rather than compare between brands, should there not be a global standard that specified the values we needed to obtain?

Again, going through competitor data provided very little information on this front. Expanded PTFE is a very niche market and from our own experience of getting the product right, we know that not much information can be divulged with regards to the behavior of the material.

We looked around for global standards and realized that although there are many ASTM standards for regular PTFE, for ePTFE there were none. A few competitors had put up data on compressibility (ASTM F 36) and creep relaxation (ASTM F 38), but these were only comparing values to “leading brands” and not referring to any standard for the values. Others simply quoted the values, but did not elaborate the specifications against which these values would hold up.

We also went through the certifications that competitor brands were providing. These included:

We contacted each of these organisations and were given estimates on how much the testing would cost. However, at no point are any values discussed. These remain guarded by the certification bodies. Our worry was that if we sent our material to these bodies without adequately testing them ourselves first – there was a risk that we may have overlooked a certain property and due to this, the product may not pass, resulting in an expensive mistake.

Eventually, we came upon the one standard that dealt specifically with ePTFE Tapes and was willing to offer values for us to compare against – the AMS 3255A.

The AMS is globally recognised as a leading authority for aerospace related materials. As such, we felt confident that their values would be stringent and thereby an effective standard to hold ourselves to.

The AMS 3255A prescribes many types of ePTFE Tape. Our basic tape falls under Class 2, Type 1, which requires the following properties to be met:

Armed with the above data and the testing procedures prescribed by the AMS 3255A, we were able to test our material in-house to confirm that the properties we were observing were as per the requirements of the standards.

In addition to this, we were also able to test the material with local certification bodies, to confirm the properties.

To the best of our knowledge, the AMS 3255A remains the only globally recognised standard to offer any values and/or testing procedures to verify the properties of ePTFE Gasket Tapes. 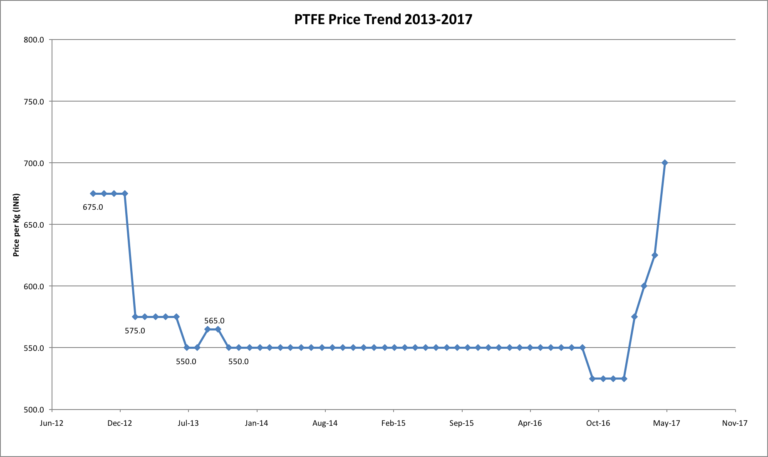 An introduction to PTFE Pricing

Being a niche industry, PTFE doesn’t exactly get a lot of press even when large shock waves surge through it, disrupting the operations of manufacturers and end-users alike.

In 2010-11, the price of virgin PTFE began climbing, after having dipped consistently over the preceding 5 years. What started out as an understandable correction soon turned into an all-out crisis, as the price nearly quintupled over the next 8-10 months.

Imagine that scenario in any other industry. If the steel price to see a 5x increase in less than a year, what horrors would that unleash into the broader market? That the PTFE industry survived is a testament to the incredible properties of the material, that makes it so difficult to substitute using other polymers such as PVC. Both PVC & PTFE are thermoplastics and The PVC prices are much lesser compared to PTFE.

To make matters worse, since the industry is small, there was no one to really make sense of the economic factors driving the price increases.

We stepped in at that time, partly driven by our own need to analyze the situation, but also because the information we collected seemed like it would be useful to other industry players.

Many articles were released between 2011 and 2013 that charted the various drivers of PTFE pricing and made sense of the driver that would play out going forward.

May 2011 – The mysterious relationship between Fluorspar and PTFE prices

December 2011 – PTFE Pricing Again – is there another price hike in the offing?

Over the past few months, there have been murmurs of a return to the high pricing seen in 2011. Resin suppliers have offered ample warning that a price revision was imminent. So far, this has translated into 2 price corrections to the extent of 10-15% and 8-10% in the months of April and May respectively.

Unlike other polymers – such as polythene, polypropylene, and polycarbonates, PTFE does not result as a by-product of the oil refining process. This comes as a shock to many, who assume that our fates are tied to oil prices and that we should, therefore, be benchmarking our final rates accordingly.

PTFE is made from the polymerization of R22 gas – a refrigerant that finds its use mainly in the air conditioning and refrigerator industries. As a result, PTFE prices are driven by the demand and supply of R22. Many OEMs are working really hard to make sure R22 is available at competitive prices.

When prices started increasing in 2011, the key driver was thought to be Fluorspar – a mineral that is critical to the manufacture of R22. In conjunction with this, a spike in demand from the AC and refrigerator markets in China along with a general crackdown on R22 usage (as it is not an environmentally friendly gas) caused prices to shoot up.

Today, the scenario is slightly different.

For one – we’re over halfway through the summer, so we’re not likely to see any shocks due to AC and refrigerator demand. Furthermore, Fluorspar supply has also regularised. A key effect of the price increase in 2011 was that idle Fluorspar mines in South Africa were reopened, offering an easing of supply to the market that was otherwise dominated by China.

If industry insiders are to be believed, the key driver this time around is environmental. China has been actively seeking to clamp down on R22 usage and has, in the process, shut down two PTFE plants that were not adhering to the standards. It is from here than the supply constraint has originated, driving up PTFE raw material prices within China. Obviously, as the China price is usually the floor price for most goods in the world, this has allowed resin manufacturers around the world to increase rates accordingly.

Where the prices go from here depend on three factors:

Commodity resins are often inexpensive and easy to process plastics. They are used in all kinds of applications, including toys, packaging, and consumer products.

Ultimately, it was due to competition from China that forced prices back to normal levels.

In the short term, it is likely that resin suppliers will again try and test the market to see what levels they can sustain at. With the threat of China temporality removed, it remains to be seen how far they will push the market.

We only have snippets of information at this point to make sense of the situation. Clearly, with PTFE being used in so many fields, this poses some concern to many industries. We will be keeping our ears to the ground to see if anything else come up.

The blending of polymers with additives is a common practice. There are very few materials that are used purely in their virgin form and PTFE is no exception here. Adding materials such a bronze, carbon and glass (to name but a few) have allowed us to augment the properties of PTFE to suit specific applications. In each case, we sacrifice some element of the original property of the PTFE, but enhance another. To take the case of bronze – the addition significantly increases the coefficient of friction of the PTFE and eliminates all electrical insulation properties. However, this is offset by a large and highly sought after increase in wear and hardness. Hence bronze filled PTFE is a preferred compound for a number of automotive and industrial applications.

In exploring what different additives do to the final properties of PTFE, we have found literature relating to materials such as those above, as well as less used additives such as molybdenum-di-sulphide, ekonol, stainless steel and graphite.

With the addition of PEEK, however, we find few sources with which to refer to on properties. While we do receive many requests for PEEK filled PTFE, the actual test data to support the compound is not easily obtained.

A 2006 paper titled: “A low friction and ultra-low wear rate PEEK/PTFE composite”, by David L. Burris, W. Gregory Sawyer, is all we have to refer to in this respect, but we will see that there are sufficient insights to help any OEM designer to assess the exact composition needed.

We have come across a few applications where PEEK filled PTFE is the requested material. In most cases, what we receive is only a sample from the client. The light brown colour combined with the fact that the material “feels like” PTFE, is usually all we have to go with. Usually, the compound is used in sealing applications where high RPMs are involved.

Unlike most other additives, PEEK blends with PTFE quite effortlessly. The lower particle size of PEEK (about 5microns against 25microns for PTFE) means that the grains of loose PEEK powder flow easily in between the PTFE grains and allow for a reasonably good blend. Further mixing is needed to ensure that the blend is uniform, but in our experience, it was less of a challenge to blend PEEK with PTFE than to blend pigments with PTFE.

Processing the material requires some minor fine tuning in the sintering cycle. However, when done properly, the resulting product is a very light brown that machines easily and offers some interesting properties. 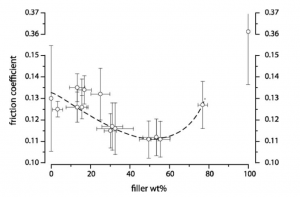 PTFE has a lower coefficient of friction than PEEK, so it would be reasonable to assume that the value keeps increasing with the addition of more PEEK. However, it is surprising to note that the coefficient is lowest at 50% of PEEK – at about 0.12. 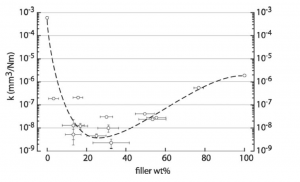 Again, given that virgin PEEK has better wear resistance when compared with virgin PTFE, we would assume that adding more PEEK keep improving this property. However, we again see that the best performing blend is PTFE+32% PEEK.

The above findings are useful from the point of view of grade selection. If an OEM wishes to design a seal using a combination that minimises the coefficient of friction and wear rates, they would be better off using a filler percentage close to 40%.