Polymer Prices Go to the Moon

Anyone even remotely associated with the polymer industry would have noticed a rather worrying trend of late. Across the board, a host of different polymers have seen price increases such as the industry has scarcely experienced before.

The curve has been so steep in some cases (prices are being revised almost daily), that it has forced many raw material suppliers to declare force majeure clauses to avoid being wedded to existing rate contracts.

For a company like ours – which has seen significant price hikes for PTFE resins in the past – this movement, while concerning, is not something unheard of. Between January 2017 and June 2018, the price of PTFE increased some 67%, jumping every month as it went from ~US$7.3 up to ~US$12.2 without stopping to pause. Today, we’re seeing something similar with other polymers, most notably Nylons (PA6, PA66), Polyacetals (POM/Delrin), Polypropylene, and ABS. 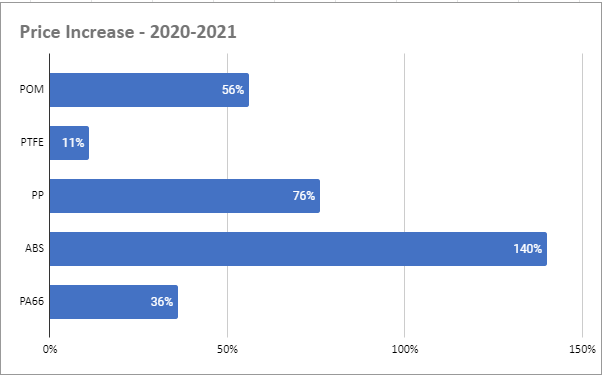 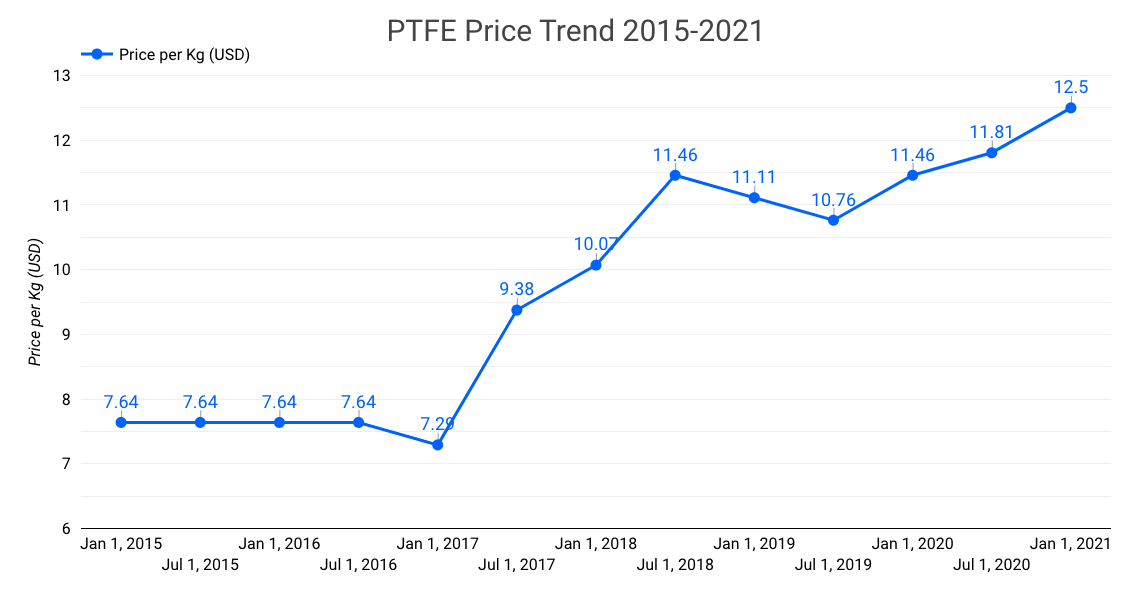 Like with the case of PTFE prices in 2017-18, here too, the explanations are many. With ABS, for example, we were told that a fire at one of the main ABS manufacturers in Taiwan has constrained global supply and caused the spike. In the case of PA66, PP, and POM, the stories are vaguer – ranging from the impact of the cold spell and blackout in Texas to the contraction in the oil markets. Most common is the idea that after a tough 2020, resin suppliers have decided collectively to play opportunist and use the current scenario – where business sentiment and consumer spending seem to be on a bit of an uptick – to recalibrate prices that have been stagnant for most of the past 2-3 years.

As diverse as the presumed drivers for the cost hikes are, the expectations for when things will stabilise are also highly uncertain. Most opinion rests on the idea that prices will stabilise around June 2021, although it is somewhat likely that after the recent shock to shipping and trade brought about by the Suez Canal blockage, things might take until July/August to reach some kind of equilibrium. This is not to say that prices will revert to their earlier levels. As we saw with PTFE, steep shocks such as this rarely rewind back to their starting points. After PTFE prices spiked in June 2018, there was a gradual easing off, but the prices still settled at a level roughly 45-50% above their earlier lows. This became the new normal around which manufacturers and their clients based their new pricing models. The fact remains that ultimately there is a trade-off between price and volume and a manufacturer of polymer resins that experiences a volume contraction less than that of the value increase per Kg will be better off with the higher prices.

So where does this leave manufacturers? Polymers such as PA66 and POM are more geared towards engineering plastic applications, so there is usually a scope – as there was with PTFE – to re-work rates with clients and move to a higher price point. It’s never easy to do this, but when the event is so systemic, clients usually relent, even if there is a sometimes uncomfortable period where they may go looking for alternatives before realising that higher prices are here to stay.

However, in the case of PP and ABS, the situation remains tricky. These are low margin polymers, which find applications in consumer products. The price sensitivity of the end-customer means that an overnight revision is rarely possible, and this puts the manufacturer in a very difficult position. The only viable option for many is to stop supplying materials, which is hardly a solution, especially after so much of 2020 was already lost to the Covid pandemic. In India, the government has been asked to restrict raw material exports and to ease import duties, however, the former has not happened while a 5% increase in import duties since the 2021 budget has only made the local pricing worse.

Amidst this turmoil, it remains to be seen where the markets will eventually settle. However, history and economics do suggest how things might play out. First, with margins already shockingly low in the injection moulding industry, manufacturers would rather shut shop than work with higher input costs without corresponding price increases. When this happens, the resultant supply-side crunch would see an inevitable improvement in realisations for manufacturers around the new resin prices. As resin prices ease off slightly, some capacity will return to the market, but the price points will remain at higher levels, even as new/returning manufacturers eventually gravitate back to their old margin levels.

One thing is for certain. After a gruelling 2020, manufacturers must now brace for another storm that, like the pandemic, doesn’t quite come with an end-by date.

1. The mysterious relationship between Fluorspar and PTFE prices