The Effect of Low Temperatures on PTFE Component Dimensions

One of the most challenging elements of machining PTFE components for export markets is factoring the effects of temperature on the material when it moves into colder climates.

Since we do all our machining in Bangalore, India, where the room temperature varies between 22-32 Degrees Celsius (on average), we need to be constantly mindful of the dimensional shrinkage that would happen when machined parts are shipped to colder countries.

In many cases, this problem is not a huge one – since the tolerance on the part may be high enough that even after shrinkage it would still fall within the acceptable band for that dimension. A tolerance of +/-0.25mm, for example, could be machined with a plus side bias of 0.15-0.2mm – which is easily maintained on a CNC machine. After shrinkage, even if the dimension reduces by 0.2-0.3mm (not unheard of as we will later demonstrate), the part would still be acceptable when inspected at the client’s works prior to assembly.

The real challenge lies in accommodating much closer tolerances. In our own experience, we encourage customers to design the part keeping in mind a tolerance of +/-0.05mm at most. Often, as the customer may have dealt mainly with metal parts, they expect that PTFE would also conform to the same dimensional yardsticks as metal (which can be machined to tolerances as fine as 1 micron). In reality – PTFE is a much softer material, which undergoes the following changes during machining, affecting it’s ability to be attain very close tolerances:

The closest tolerance we have managed to maintain on PTFE has been +/-0.012mm – which was done on a component made from PTFE+15% glass fiber, having an outer diameter of 19.04mm.  We did this by experimenting with different combinations of tools, RPM, feed rates and programs, until the dimension was consistently within the tolerance range. However, when the part was shipped to the client in Canada, the trial lots failed due to being undersize. Eventually, through trial and error, it was found that a dimension of 19.08-19.10 was needed in India, in order for the part to be within tolerance in Canada.

While this worked out well eventually, in many cases, customers are not willing to experiment with trial lots – especially if their requirement is urgent. This has led us to seriously consider the practical implications of shrinkage and how we can make an educated guess on dimensions so as to avoid rejection/ rework and/or minimize trials.

Virgin PTFE theoretically experiences a 1.3% variation in dimension between 0 and 100 Degrees Celsius. Plotting this as a linear progression around the dimension of 19.04 would give us a chart like this: 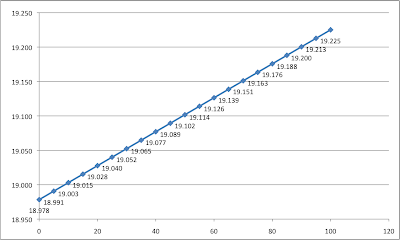 In other words, given the room temperature in Canada being ~10-15 degrees cooler than in India, a shrinkage of 0.03mm could be expected when the parts reached Canada. We expected that for glass filled PTFE, this may not be quite as high – as glass itself may not be as susceptible to dimensional deviation based on temperature.

The grades we used were the following:

For each grade – 5 identical parts were machined and their dimensions were measured along the same point. The dimension considered was 19.07 +/- 0.02mm. The parts were first measured at room temperature (about 25 degrees Celsius) and then put into a sub-zero environment for 4-5 hours. Each part was then taken out individually and measured again at fixed intervals of 10 minutes. The aim was two –fold: (1) to observe the extent of shrinkage due to the cold and assess the rate of expansion as the part warmed up at room temperature (2) To gauge whether the part, when left at room temperature overnight, regained it’s original dimension.

The charts below show the results for each grade: 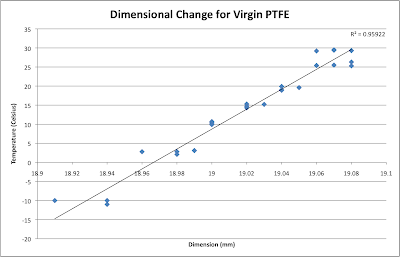 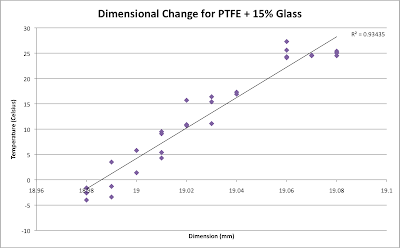 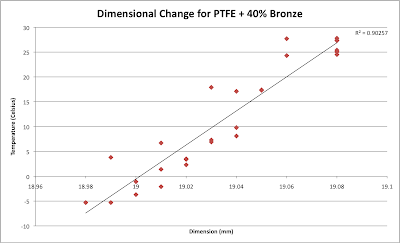 It was observed that the virgin material experienced the highest shrinkage (0.9% over a temperature range of 40 degrees Celsius). Both Glass and Bronze filled PTFE experienced lower shrinkage (0.5% over a temperature range of 30-32 degrees Celsius). It is also interesting to note that virgin PTFE reached a much lower minimum temperature. While the filled grades were recorded as having temperatures of  -4 to -5.3 degrees at their lowest, the virgin material was recorded with a minimum of -11 degrees – despite being subjected to the same sub-zero environment prior to measurement.

Additionally, all three grades reverted to within 0.01mm of their original dimensions when left overnight to warm under room temperature. This suggests that the dimensional change is linked purely to the ambient temperature and that there is no observable stress build-up in the material due to the cold which causes it’s original dimension to alter permanently (at least, not in the range of -15 to +30 degrees Celsius).

All three materials lend themselves to a high R-squared straight-line graph. While we accept that this is a fairly simplistic relation to assume, the R-squared changes only marginally when we try to introduce more complex equations. Furthermore, while the relation between the dimension and the temperature may not be a strictly linear one – for the purpose of practicality, we believe that it serves quite well. In other words, assuming a 0.2% shrinkage for every 10 degrees in temperature (for virgin PTFE) would imply that a 20mm dimension would need to accommodate a plus side tolerance of 0.4mm. This is in line with our own trial and error conclusions thus far, when exporting to colder countries.

Finally – it could be pointed out that the same experiment could be carried out at higher temperatures to gauge whether PTFE continues to expand the same way in the other direction. However, as the bulk of our export destinations are in fact colder countries, we have not looked at this right now. Perhaps the same could be taken up in a separate post.