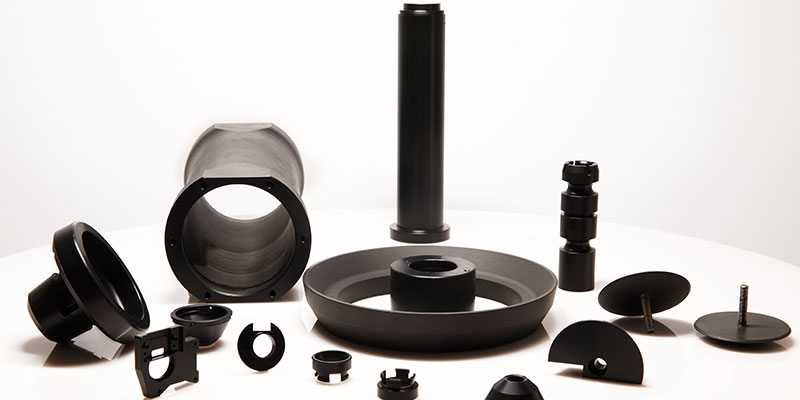 The effects of Carbon Nanotubes on PTFE Properties

It has long been known that the properties of PTFE, while diverse and highly sought after, can be further enhanced with the addition of fillers. Given the high-melting point of PTFE (>350°C), most such fillers need to be stable at high temperatures in order to maintain their integrity during the sintering (curing) process that takes PTFE from a raw state into its final, workable form.

Over the years, fillers such as glass, bronze, stainless steel and carbon have become commonly used. Each of these fillers – used anywhere between 5% and 60% by volume - adds something to the property of the PTFE, while also taking away. For example, the addition of bronze greatly enhances the wear resistance of the material but increases the coefficient of friction and also renders the PTFE unsuitable for any electrical applications.

Over the past few months, we have been working extensively with carbon filled PTFE, in an attempt to improve the anti-static properties of the material. Being an excellent electrical insulator, PTFE tends to allow static charges to build up on its surface, rather than allow any vent for the charge to dissipate. While this property is useful in applications where high voltage loads need to be contained, it poses some problems in areas where a spark – caused when the static charge reaches some critical mass - can cause other materials around the PTFE to ignite. In order to dissipate the static charge through the material, carbon fillers are usually added. The resulting material retains much of the dielectric properties of PTFE but gives just enough conductivity within the material to allow static charges to dissipate. Such anti-static materials have become popular, calling for both machined components and PTFE tubes to be made using the compound.

The quantum and variants of carbon used in such compounds can offer differing values for the surface resistivity of the material. The standard grade of PTFE+Carbon employs a 25% content of the filler by volume. By most accounts, this is rather high. In addition to being a little too conductive, the compound also tends to “shed” some quantum of carbon in the form of microparticles. This can cause big problems in precision equipment, where clean-room levels of non-contamination are called for both within and around the apparatus. As a result, compounds have been developed using Vulcan.

Vulcan is a form of specialty carbon black which can be used in percentages as low as 2% to induce conductivity in PTFE. The resulting material is a lot softer and smoother than PTFE+25% Carbon – which, apart from being less ‘clean’, is also tougher to the machine – and is ideal for electrical applications calling for anti-static properties in sanitized environments.

We recently used Vulcan to manufacture anti-static tapes but were informed that the tests were unsuccessful. The client’s application called for a surface resistivity of 1 x 104 Ohms, whereas our material was only able to offer 1 x 103 ohms. The failure led us down a path of discovery to see what other materials could be added to further improve the properties as required.

Many new studies have pointed to the addition of carbon nanotubes to achieve the surface resistivity required.

Carbon nanotubes have been around for a while and its property as a high-strength to weight material has made it the stuff of the future. In addition to its impressive load bearing properties, the material also acts as a semiconductor. Although the applications into PTFE are relatively new, studies have prescribed its addition as a substitute for carbon black. According to these studies, the addition of as little as 1% of carbon nanotubes into PTFE can offer a surface resistivity of 1 x 104 Ohms, as required by the application.

In addition to the electrical properties, fillers of 7-10% have been shown to improve the wear properties of the material significantly. Another study looks at a composition of PTFE+20% Ekonol+1% CNT, claiming that at this composition, the tensile properties and elongation reach an optimum.

The mixture of carbon nanotubes to PTFE as a dispersion allow for enhanced corrosion resistance and deliver a superhydrophobic layer.

In the wider scheme of things, both PTFE and carbon nanotubes are relatively new materials. We are still discovering properties of each and there is no doubt we will experiment extensively with different compositions to see what effects arise.