The mysterious relationship between Fluorspar and PTFE prices

It is strange that despite the excessive and unprecedented hike in PTFE prices, so many processors and end-users remain considerably in the dark with regards to where the problem originates. Even the more technically inclined processors with whom I have interacted have more or less thrown their hands in the air and decided to just take things as they come.

When we embarked on our own journey to understand the factors driving higher PTFE prices, we too felt fairly defeated by the complete lack of transparency into the workings of the PTFE industry higher up the value chain. All we had to go with was one word, which has been tossed around from the beginning as a sort of cover-all explanation for the predicament we are in.

Understanding the Fluorspar situation is essential to answering the question of why PTFE prices have reached such highs.

We are going to look at the fluorspar issue in the following steps:

We have looked at Fluorspar earlier. It is a naturally occurring mineral, used in a multitude of industries ranging from metallurgy, ceramics, glass, aluminium and yes – fluoropolymers.

Fluorspar (also commonly called Fluorite) is divided into 2 principal grades based on the concentration of Calcium Fluoride (CaF2) in the material.

Acidspar – which comprises about 60% of the total – is the raw material for hydrofluoric acid (HF) and by extension for all fluorochemicals. A significant amount of acidspar is used in the aluminium industry, with about 55-60% used for fluoro chemicals. We are told that of this 55-60%, a bulk of the material is used in PTFE manufacture.

From here on when we refer to fluorspar, we will be referring to this grade only and the economics surrounding it, which have played such a huge role in the PTFE industry.

While the practical conversion of fluorspar to PTFE is a proprietary technology (and by no means easy to fit into one blog article!) – we have looked at the theoretical formulae and corroborated this with available information to arrive at some basic ratios. These ratios can be used to calculate the impact of a rise in fluorspar prices on the cost of manufacturing PTFE.

In the first process, fluorspar is reacted with Hydrogen Sulphide to give Hydrogen Fluoride (HF). HF is then reacted with Chloroform to give Chlorodifluoromethane (more commonly known as HCFC 22 or R22). R22 is a well-known refrigerant – used not only in PTFE manufacture, but in refrigeration and air conditioning as well (although it is being phased out slowly in these industries – we will look into that later). Finally, R22 undergoes polymerization to give the TFE chains, which become PTFE during the sintering process.

Theoretically (as per the molecular weights of each substance), it would require 1.95 Kgs of fluorspar to manufacture 1 Kg of HF. Practically, we are told this ratio is more like 2.25:1 – implying an inefficiency factor of about 15% in conversion.

Similarly, a theoretical calculation would suggest 0.8 Kgs of HF required for 1Kg of TFE. If we apply a more strict inefficiency factor of 40%, it suggests a ratio of 1.15 Kgs of HF for 1 Kg of TFE.

So putting this together gives us a ratio of 2.6 Kgs of fluorspar as the input for 1 Kg of TFE.

In other words, a $1/Kg increase in the price of fluorspar increases the cost of TFE by $2.6/Kg.

We will come back to this ratio later – as it is critical in assessing the scenario at present.

The price of fluorspar

It would not be inaccurate to say that there has indeed been a significant price increase in fluorspar. The graph below shows the price increases in China and in Mexico. Although Mexico is cheaper, China’s volumes are much higher – implying the global price more closely follows their price trend.

China’s high price is driven largely by a 15% export duty on fluorspar – which was put in place to ensure that the domestic market supply is adequate. It is not clear exactly why China has put this duty into place. Some feel it is a China dominance story as China tries to take over the PTFE industry, but our own sources estimate that close to 30% of the domestic PTFE processors in China have shut-down due to the price increases in PTFE resin. Hence, the China dominance story does not add up. We believe that it may be driven more by a nearly insatiable domestic demand for R22 as a refrigerant (fueled by China’s ever growing consumer base) coupled with China’s own moves to restrict R22 supply for environmental reasons. It does remain to be seen whether the passing of the summer months eases the domestic demand for R22 and gives some respite to fluorspar prices. 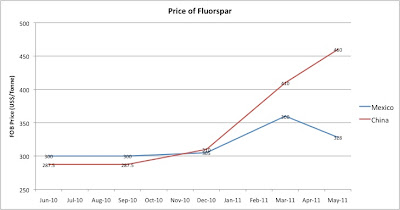 Whatever the reason, it does point to a price increase of about 53% in fluorspar over the past year – corroborating what many resin suppliers have indeed claimed.

It is interesting to note that the prices in Mexico have indeed fallen in the past 2 months, while reports indicate that there has been no movement in price in China between April and May. Nonetheless, industry experts do not see any significant easing of fluorspar prices within the next year.

Supply side dynamics of fluorspar

With regards to manufacturing fluorspar, China outstrips all other countries, as shown below: 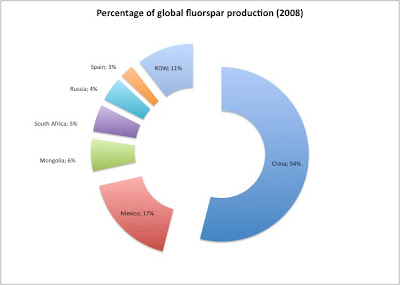 However, when we look at global reserves, China’s dominance is clearly unsustainable. 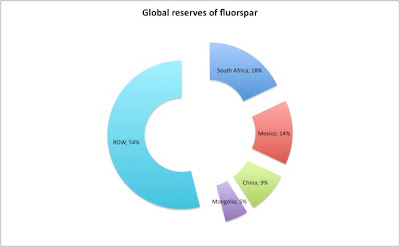 In fact – unless China finds new reserves of fluorspar, at their current rate of extraction, they would run out of domestic supply within 7 years.

The recent crisis in fluorspar price and availability has led many countries to look into re-opening old mines, which had earlier shut down. We will look at the impact of this shortly.

Going by the price data given above, we can see there has been an increase of US$160/tonne – or US$0.16 per Kg – in the price of fluorspar from China. Taking our ratio of 2.6 – this would translate into a US$ 0.42 per Kg increase in the input cost to PTFE.

In an earlier article, we had outlined that the price for PTFE virgin resin had increased by 185% in the past year – or by about US$13.3 per Kg.

Clearly, the difference between these two figures cannot be explained by the price of fluorspar alone.

If we dig deeper – we would need to realize that it is not so much the price of fluorspar as the lack of availability that is driving the PTFE prices higher. PTFE resin manufacturing is a capital-intensive field, requiring a lot of infrastructure. With a restriction in their supply of fluorspar, resin manufacturers are constrained to supply quantities much below their installed capacities – meaning higher average costs per Kg and consequently a higher price for PTFE resin.

Hence, while it is not wrong to say that PTFE prices have been influenced by higher prices of fluorspar – it is on the supply of fluorspar that we need to focus to understand how and when this situation will get resolved.

Looking ahead to the short and long term

A few global trends have caught our attention with regards to the short and long term implications for fluorspar (and by extension – for PTFE).

In the short term, the only easing out that can be expected is if the passing of the summer months reduces China’s domestic appetite for refrigerants. If this is the case, we may see some price stability post June 2011.

In the medium to long term, there may be several factors, which may positively influence the PTFE industry.

For one, the scaling back of R22, as a refrigerant due to environmental reasons would bring focus back to fluoro polymers as the primary consumer of R22, boosting supplies of R22 to the PTFE resin manufacturers.

Secondly, as more countries look inward for fluorspar mining, it is likely that there will be an easing of supply. We have already shown that the bulk of the reserves are not with China. With Mexico showing initiative in increasing their supply of fluorspar and South Africa expected to follow suit, we may see a significant increase in global production – possibly in the next 2 years.

Finally, there are technological advancements looking into production of Hydrogen Fluoride without the use of Fluorspar. If this is successfully commercialized, the dependence on fluorspar for PTFE manufacturing will reduce considerably.

PTFE reacts tribochemically with the oxidized surface of aluminum as a Lewis acid catalyst, forming a fluoride on the aluminum surface. The aluminum fluoride formed was a cause of decreasing tribological performance of PTFE because of less formation of a transfer film. Based on this reaction it was suggested that preventing the fluoride formation is a key to improving the tribological performance of PTFE sliding against an aluminum surface.

Right now, all we can be assured of is that with a 53% price hike, Fluorspar is certainly a very commercially attractive mineral to produce and countries with reserves would be putting efforts to turn them into profits. And since we know that the fluorspar price only marginally dictates the price of PTFE resin, once supplies ease out, it should bring stability back to PTFE prices.

In 2017, China listed fluorspar as a strategic mineral. The Chinese fluorspar exports have continued to decline with acid-spar exports since 2011. The future of flurospar demand will depend on its production, development and use of fluorocarbon substitutes.