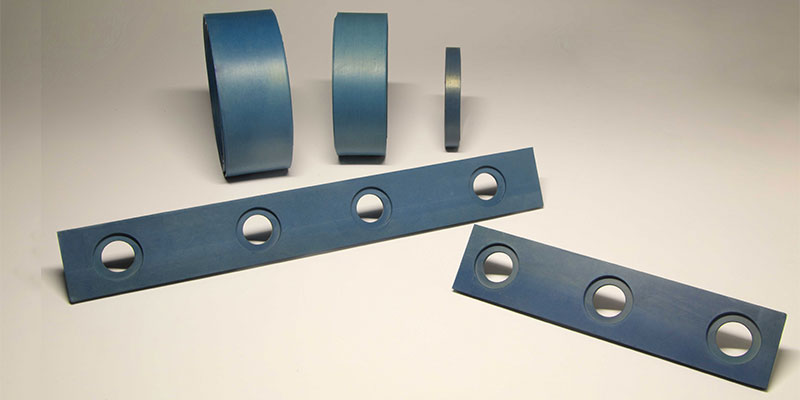 Understanding the Characteristics of Turcite

It is only rarely that a marketing push succeeds so much that the brand name becomes synonymous with the product itself. When Turcite® B was first introduced, PTFE itself had been around for quite a while. Yet, so effective was the branding of this variant of PTFE that everything from the properties, to the composition to the colour merged under a single umbrella and became known simply as “Turcite®”. The material itself has become a mainstay in the industrial goods market with machine tool builders, re-conditioners and bearing manufacturers demanding it for their applications.

As the market expanded, new manufacturers developed their own variants under different brand names (ours being Lubring), which all succeeded in their own way. However, to this day, clients will initially demand “Turcite®” – following which there will be a brief discussion about the fact that our material is equivalent to Turcite®, but that we brand it under a different name. Usually the client is happy as long as the properties match and that the colour of the material matches the turquoise-green shade developed specifically for Turcite®.

We want to take a closer look at this material, because despite it’s widespread usage, there are always questions from clients regarding the application and installation of this material. We will look at the following aspects:

Quite simply – Turcite® is PTFE impregnated with fillers and additives that serve to enhance the wear properties of the material. It is used, most often in a sheet form, in thicknesses ranging from 0.5mm (0.02”) to 4mm (0.16”), although in some applications, it is also used as a bush and in more rare applications it is used as a thick plate.

Around the world, Turcite® is identified by its distinct turquoise (blue-green) shade. While some may mark this as another branding tactic, the pigment used is not a random choice. Studies of the wear properties across different PTFE-pigment combinations show that the specific pigment used in Turcite® (Lubring) sees a spike in the wear resistance of the material. It is clear that there was a significant amount of R&D done before the specific shade we use today was selected.

When we look at terminology, there are a few variants used around the world. Other than “Turcite”, we have had clients refer to the material as “Turkite”, “Turquite”, and “Torquite”. Clearly the original name itself has spread far enough and for long enough to spawn organic variations in different regions of the world.

Being based on PTFE, the material cannot be extruded like a normal plastic sheet and instead needs to be “skived” – the process most commonly used to make thin PTFE sheets. Also, the material will not easily adhere to other surfaces – another feature resulting from its PTFE base. Therefore a chemical etching is required on one surface of the material, so the sheet can be bonded to other articles.

Most commonly, Turcite® (Lubring) has been used in the machine tool industry where it serves to either replace or reinforce standard phosphor-bronze LM guideways. The material was earlier used primarily to recondition old machines in which the guideways had worn out. However, increasingly it is incorporated in new machines as well – owing to the higher life and lower maintenance required in comparison to metal guideways.

As mentioned above, Turcite® is also used as a bush – which needs to be specially moulded and machined as per the customer’s requirements. These bushes are usually replacements for metal bushes – especially in areas where the lubrication of the metallic bush is as issue. Turcite® – and in fact all PTFE grades – has self lubricating properties which means it can function deep within a sub-assembly taking enormous wear loads and does not need to be lubricated constantly to avoid damage.

However, the material is not an out-and-out replacement for metal. Being PTFE based, the material has a compressive strength limited to 150 Kgs per square cm (2,200 psi). This means that a single square foot of Turcite® can accommodate a load of up to 150 Tonnes – which is more than sufficient for most applications. However, it is also a soft material (Shore D Hardness: 50-60) – meaning that point loads and excessive squeezing of the material can cause deformation.

Another limitation is with regards to insulation. Although the material has excellent temperature resistance (up to 260 Degrees Celsius/ 500 Fahrenheit), it does not have any electrical insulation.

In all, the industries for which we have supplied Turcite® (Lubring) include:

Preparation: The metal surface to be mounted with Turcite® (Lubring) can be prepared by the normal machining methods such as, grinding, milling, shaping, and planning. The surface roughness of all forms of preparation should be preferably between Ra = 1.6 µm and Ra = 3µm and not more than Ra = 6µm. Once roughened the surfaces can be cleaned with Trichloroethylene, Perchloroethylene or Acetone.

Bonding: For bonding of Turcite® (Lubring) the following resin adhesive can be used: Ciba Geigy's Araldite - Hardener - HV 953U; Araldite AW106. The Araldite should be applied both to metal and Slideway and be spread as uniformly as possible by means of a serrated spatula. To obtain the best dispersion of the adhesive, when spreading on the surface brush in the longitudinal direction; when spreading on the metal, brush in the transverse direction. The total quantity of bonding should be approximately 200gm per sq. mt.

Hardening: After mounting the slideway a clamping pressure of between 30-35 Kg/cm2 is recommended. It is important to keep the pressure constant during the hardening process. Due to the differences in the thermal expansion coefficient of the materials, maximum curing temperature should not exceed 40°C. The hardening time for various temperatures is: 20°C min 15 hours; 25°C min 12 hours; 40°C min 5 hours.

Finishing: After curing of the adhesive, the Turcite® (Lubring) can be machined by conventional means – if required. The choice depends on the machinery available viz.: grinding; grindstone.

Grinding: For grinding of Turcite® (Lubring) use the same speed as grinding cast iron, taking care that sufficient cooling is used with an ‘open ’stone. The grindstone should be preferably silicon carbide-based with rubber or polyurethane binding; grain size 80-30. Alternatively, aluminum oxide with rubber bonding may also be used for soft, fine grinding action, pre-polishing and pre-mating treatment.

Metal Mating Surface: The metallic mating surface running against the Turcite® (Lubring) pad should be preferably Stainless Steel (SS) 304 with a grade #8 mirror finish. Against this material, Turcite® (Lubring) will have a coefficient of friction of between 0.1-0.12.

The recent surge in PTFE prices has obviously had a substantial impact on the price of Turcite® (Lubring). However, owing to the ambiguity surrounding the material’s composition (many clients know it simply as “Turcite®” and are unaware that it is PTFE based), there has been genuine confusion as to why the price has increased recently. While it takes time and patience to convince clients that the price of Turcite® is governed by the price of PTFE, it does serve as yet another reminder of how an effective branding campaign can truly give a product its own identity.

Turcite® is the registered trademark of Trelleborg Sealing Solutions