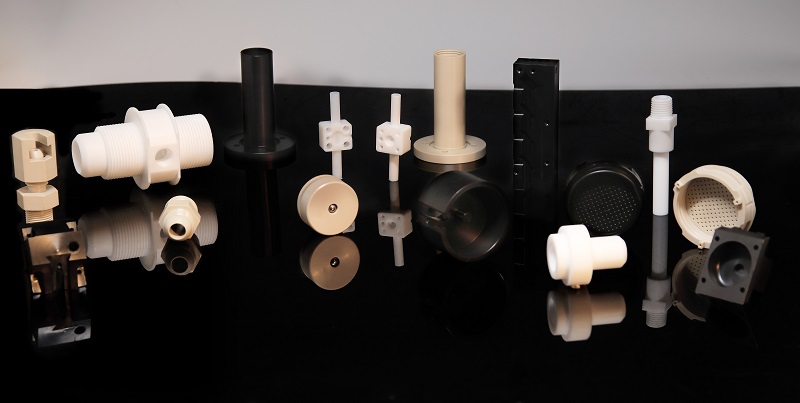 Polymer precision machining is challenging and throws up many problems that require a deep understanding of the plastic in question to solve. Unlike metals, which lend themselves to tolerances of within a few microns, machined polymers can rarely be expected to offer anything under 50 microns (0.05mm) on dimensional tolerances. In addition to this, there is unpredictability, both in the post-machining behavior of the part and in the long-term dimensional stability during operation.

For the most part – any post-machining dimensional issues can be easily resolved by observing the polymer for a few days and then working backwards to create the buffers needed such that once the part settles down, it conforms to the drawing requirements. Provided the polymer is processed correctly, there will be a degree of predictability on, say, the shrinkage of the part after machining.

Recently we machined an 8” PTFE Seal, which exhibited a shrinkage of 0.2-0.3mm within 24 hours of machining. When observed for another 24 hours, there was no additional shrinkage seen. In this case, we had to go back to the moulding and sintering cycle (heat cycle for curing the polymer) and make the necessary adjustments such that this shrinkage could be avoided. As an added measure, we ensured that the diameter we machined was on the very far end of the tolerance spectrum, such that even if a 0.1mm shrinkage did occur, the part – which had an overall tolerance of +/-0.25mm, would still be well within the criteria for acceptance.

Performance on the field is another issue altogether. While it is tough to ensure any level of dimensional stability on highly mechanical applications, where the polymer may be surrounded by metals and hence subject to loads and stresses from much harder materials, we do need to understand the reaction of the plastic to heat.

In an engineering application, a plastic will be analysed for load, wear, and temperature resistance. Usually, this third parameter will focus on the maximum service temperature as a measure for whether the polymer can survive in the given application. However, when we look at precision machined polymer components, a lot of thought must be given to the glass transition temperature of the polymer material.

Put simply, the glass transition temperature is the point at which the polymer moves from a crystalline state, to an amorphous state. The resulting shift can be highly significant for a polymer, since the molecules will try and realign to the new state and this can result in dimensional changes to the part itself. In a crystalline state, one would expect the links between molecules to be more rigid. As such, any machining done on the part would be both predictable and allow for a high level of dimensional accuracy at low tolerances. However, when amorphous, the unpredictability sets in and the part is likely to ‘resettle’ causing tolerances to relax.

If we take the example of PEEK, we can see that the glass transition temperature is 140°C. While this may be well above the service temperature of other polymers, it also causes some problems. PEEK parts that are used at room temperature (25-30°C), but where the application can call for temperatures in excess of 200°C, PEEK components may experience some issues. Even though PEEK can withstand the service temperature comfortably, the increase of temperatures beyond 140°C will cause the part to experience changes at the molecular level and may push its dimensions out of tolerance, causing a misalignment in the assembly.

In contrast to PEEK, we have PI (Polyimide). Here we see that the glass transition temperature is 340°C – very close to the maximum service temperature of 360°C. As a result, for high temperature applications, PI ensures that you can operate close to its limit and not sacrifice any dimensional integrity.

Other polymers, such as PTFE, LDPE, and HDPE, have glass transition temperatures well below zero. This implies that for any non-sub-zero application, the polymers are always amorphous. Increasing the crystallinity of these polymers is challenging and as a result the typical tolerances one can expect on these plastics would rarely be below 50-100 microns. PTFE, with fillers of glass, can be machined to a tolerance of as low as 10 microns (0.01mm), but this is only in special cases.

In general, polymers which have a smaller difference between their glass transition and service temperatures would offer higher predictability on dimensions in applications where the temperature would fluctuate. 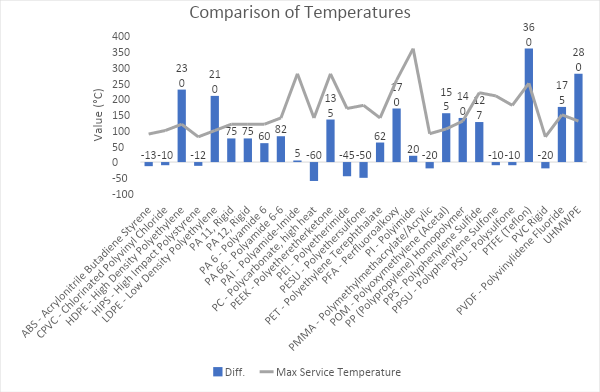 Coming back to the issue with PEEK, the fact remains that PEEK is used in many high-temperature applications. The method to ensure its stability is tricky and involves a lot of trial and error. Annealing the part at above its glass transition temperature and allowing it to cool gradually can help immensely in ensuring that the molecular realignment is minimised. In other words, by letting the plastic become amorphous and then re-crystallise, we limit the extent to which dimensional deviations can occur during operation. Annealing is highly critical to PEEK, since non-annealed parts will easily crack not only during operation, but during machining itself. PEEK is somewhat unique in that it may even require annealing between machining operations to ensure that the structure of the polymer is being allowed to relax each time stresses are placed on it. This repeated annealing needs to be done using trial and error – as each component would behave differently and react in its own way to a specific machining operation.

Ultimately, the choice of polymer would depend on several factors other than temperature. However, it is very important to note that when making the choice for a polymer in a high-temperature application, thought needs to be given not only to the maximum service temperature of the polymer, but also to the fluctuations in temperature during operation. Only by comparing this with the glass transition temperature can one be assured that the polymer fits the application.