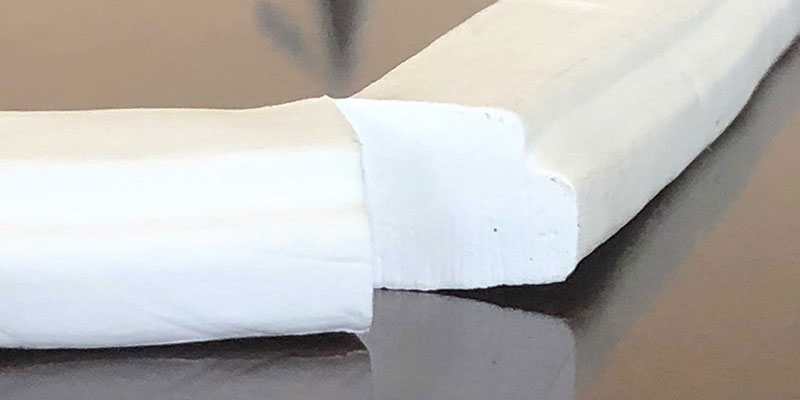 The best products are usually borne from testing the limits of what can be manufactured. As any company would testify, making a commoditised item has few benefits other than giving a good boost to volumes. The true joy in manufacturing comes from creating something specialised and knowing that the client not only appreciates the efforts involved, but that they would have no reason to take their business elsewhere.

One such product we were asked to develop was a unique and challenging profile in ePTFE (expanded PTFE). We should point out that at the time of taking on this development, our own understanding of ePTFE was still nascent and our knowledge of what our equipment could manage was also still developing. Nonetheless, we took on the challenge, because it seemed like a good one and because, if nothing else, the learning curve it would take us on would undoubtedly leave us more technically sound than when we started.

Both these metrics were challenging. For one, making such a large cross section would involve significant load on our equipment. Making ePTFE involves stretching, which needs to be done by gripping the top and bottom of the tape and pulling it. The higher the cross section, the more the load on the pulling mechanism.

Most expanded PTFE (ePTFE) tapes have specific gravities of between 0.55-0.75. Attaining 0.35 would mean stretching at an even higher rate (more stretching means softer, less dense tape) when the cross section is already very difficult to stretch.

Furthermore, the step makes it complicated. We were not sure how the profile would remain after stretching, since the tape tends to get squeezed in order to improve the grip and stretch the tape adequately.

We started by making a simple rectangular profile, without the cutaway. We needed to first assess whether we could even attain 0.35 on a cross section this size, considering the load involved.

At first, it seemed fine. The final dimensions were a bit off, but the tape coming off the machine seemed really soft. We tested a small piece and found it was just under 0.35. However, when we checked the same tape a day later, we found that it felt harder. Another test showed the specific gravity had increased to nearly 0.6!

This led us to our first learning – that because PTFE has memory, it will try and revert to its original form. The stretch rate we were giving was so high that the expanded PTFE was ‘breathing back’ as it was cooling, as it tried to reduce the tension within the material.

We were able to remedy this by using special spooling restraints, that prevented this ‘breathing back’ until the ePTFE had cooled to room temperature.

The second challenge was the step itself. We did not know to what extent the stretching process would deform the step. Making a step exactly as per the drawing would not work, as there was definitely some amount of deformation to be expected. Ultimately, we had to go with trial and error here, which involved a lot of die work, as the extrusion die needed to be modified and/or scrapped to change the final dimension.

We were told by the client that they had approached 4-5 different manufacturers before they found us. All had been defeated by this development.

The resulting product is now a part of a sealing mechanism that has the potential to revolutionise the sealing method used in the client’s industry!