The seven sides of PTFE (or, why PTFE is way cooler than most realize)

Considering we sell PTFE for a living, you may be skeptical when we shower praises on it’s versatility as a polymer. But it’s possibly this versatility that makes PTFE such a viable choice when we focus on a polymer that we would like to sell.

Since it’s discovery, the number of applications in which PTFE is used has grown consistently. Even today, we have clients who come to us unsure about whether PTFE might be suitable for their applications, only to realize that it’s everything and more that they were looking for. In most cases, PTFE outclasses other polymers by such a long stretch, that it not only becomes a suitable material for any given application, but rather the only viable option in the long term. Furthermore, the immense breadth of properties exhibited by PTFE allows the OEM user to augment the capability of his equipment (higher temperatures/ rpm/ wear rates etc.) without having to worry about whether the PTFE component within the equipment will be able to handle the increased load being applied on it.

In our earlier piece, we had also said we would look into the comparison between virgin PTFE and other polymers to gauge what level of substitution might be possible given the steadily increasing price of PTFE. In outlining the properties of PTFE, we are able to factually compare it with other polymers, so as to allow an educated analysis of possible substitutes for a given application.

PTFE is an excellent insulator. One might use PVC tape to mend a wire around the house, but when presented with heavy duty currents and a risk of electrocution – no risks can be taken. PTFE rates highly on dielectric strength (effectively an indication of how much voltage can be passed through a film of a material before it ‘breaks’ and allows the current through. As the table shows – PTFE does have a few substitutes if we were to look at this metric alone, namely PFA, FEP and UHMWPE. However, when we look more closely, we realize that both PFA and FEP are 4-5 times the price of PTFE, while all three polymers have a lower melting point (discussed later) – making them unsuitable for applications where high-voltage coexists with high temperatures (as is often the case). 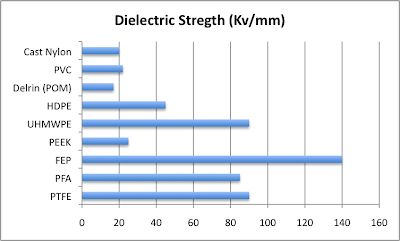 An additional issue with UHMWPE is that like PTFE, UHMWPE cannot be melt processed. Therefore, the only option to make tape from both UHMWPE and PTFE is a process called skiving (a peeling process where a thin film is drawn out from a billet of the polymer using a blade). While virgin PTFE allows itself to skive easily to thicknesses as low as 0.04mm, UHMWPE is much tougher to skive and cannot achieve such low thicknesses easily. Thus, thin tapes from UHMWPE are not so easily manufactured. However, for those with low temperature applications with high voltages, UHMWPE would be a suitable alternative to PTFE, provided thickness in excess of 0.2mm are needed.

It’s obvious to see here why PTFE rates so highly rated in any application where the general operating temperatures are expected to go in excess of 100-120 Degrees Celsius. Not only does PTFE not succumb to high temperatures, but it’s heat retention is so low, that only a sustained temperature at levels in excess of 300 Deg. C can cause it to deform. The stubbornness of PTFE to heat was truly experienced by us for the first time when attempting to weld PTFE. The operation requires a concentration of heat (using a hot-air gun or a heating element) to bring the PTFE up to it’s gel state (the closestPTFE comes to melting is a transparent state at which point it is soft and will deform under pressure, but will still not flow or be easily adhered to any other surface – including itself). If the heat is removed – even for a second – the PTFE immediately “freezes” back into it’s opaque waxy state. 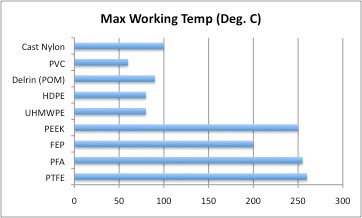 As mentioned above, most industrial applications – be they electrical, chemical or automotive – do experience temperatures in excess of 80-100 Deg. C – making most other polymers unsuitable. Furthermore, most applications involving high temperature transfer of fluids cannot do without PTFE tube – which are highly sought after in many chemical industries.

Again – PEEK, PFA and FEP – although equally proficient at handling high temperatures, are selling at many times the price ofPTFE; so the cost effectiveness of PTFE keeps it a preferred choice.

So low, in fact, that PTFE is the only material on which a gecko cannot stick itself! PTFE’s low coefficient of friction (also known as the non-stick effect) is well known thanks to the frying pans that tout its virtues. However, that’s not the only area in whichPTFE outshines in this respect. 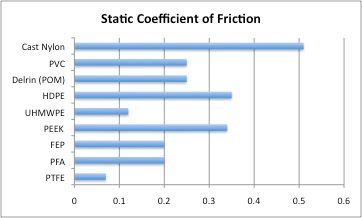 For one – PTFE is unique in that the static and dynamic coefficients of friction are pretty much the same. The practical implication of this is that you could have a PTFE component within an assembly which hasn’t been used in months, and when the parts start moving – PTFE behaves exactly as if it’s been used all along. This is especially useful in applications such as bridge bearings and ball valves – where a high static coefficient of friction could put undue stress on the other moving parts.

Another facet to this already burgeoning properties list, is that with PTFE – increasing the load reduces the coefficient of friction. Again – this is particularly useful in bridge bearings – where PTFE is an invaluable component of the bearing due to its compressive strength (discussed below) and low friction. 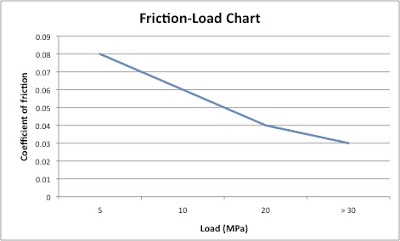 While UHMWPE also has a fairly low coefficient of friction – it does exhibit significant creep – making it unsuitable for bridge bearings. However, in applications requiring self lubricity and constant moving parts – UHMWPE would a a very cost effective solution to PTFE.

PTFE is capable of bearing high loads without deforming. It is however, not toally unique in this aspect. While Delrin and PEEK would not be cost effective versus PTFE, both PVC and Nylon have higher compressive strengths and are cheaper in comparison with PTFE. However, as discussed above, most of PTFE’s load bearing applications involve their use in bridge bearings – where the low coefficient of friction and chemical inertness also play a part in its preference. 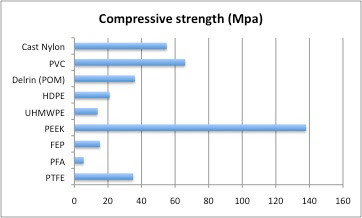 Barring a few exceptions, PTFE is largely inert. The only other plastics which share its range of inertness to different substances ate UHMWPE, FEP and PFA. All three materials, along with PTFE are used in the medical industry for both laboratory wares as well as in implants for patients. While PTFE, PFA and FEP tubes are used extensively for catheters and urological stents,UHMWPE has become the mainstay in medical implants such as joint replacements.

Another fast growing application of PTFE tubes is in the manufacture of umbilical cords. The cord (completely non-biological) is used in the oil & gas industry to takes vital gases from the refineries to the labs – where they are analysed to make sure that the reactions within the refinery are happening properly. The use of PTFE is vital, as its inertness ensures that the gases are not modified in any way during transit within the tube – as that would lead to a spurious analysis.

While PTFE has very decent wear resistance in comparison with weaker polymers, it is easily surpassed on this metric. It must be said, however, that PTFE with bronze fillers does exhibit improved wear resistance compared with virgin PTFE (bringing the value closer to that of UHMWPE), while its self-lubricity (due to its low coefficient of friction) gives it a huge boost in the use ofPTFE+Bronze as wear pads and slideway bearings (a material commonly known as Turcite B). Still – PTFE+Bronze has a 1:20 ratio on price when compared with UHMWPE – making UHMWPE the more cost effective solution. In an attempt to counteract the rising prices of PTFE, we have been recommending that clients shift to UHMWPE. However UHMWPE still suffers the disadvantage of low temperature resistance – making many continue with PTFE. Also – while PTFE can be bonded to a metal substrate by chemically treating (etching) the PTFE surface, UHMWPE requires corona treatment – which is only partially effective in making the material bond able. 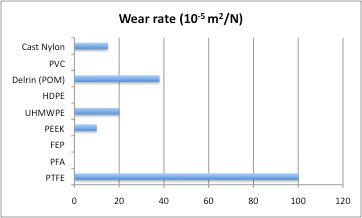 PTFE has an incredibly low water absorption level which, when combined with its chemical resistance, makes it a clear winner in both outdoor applications and applications in a wet environment.

However – when dealing with wet environments, it must be noted that both UHMWPE and HDPE are just as effective – and much cheaper. PTFE continues to be used in applications such as sealants (especially thread sealant or plumbers tapes), while expanded PTFE is used extensively due to its added advantage of a spongy texture.

In conclusion: the main purpose of this piece was to illustrate the properties of PTFE in a quantified manner and subsequently compare it to other polymers in its class to gauge whether any substitution is possible. As we have seen, while some polymers compare on some metrics, there is no clear substitute across characteristics. In addition to this, is the cost comparison – with only UHMWPE, HDPE, PVC and Nylon having clear cost advantages when compared with PTFE. And even though the cheaper polymers do match up to PTFE on some metrics, to replace PTFE outright would be very difficult as the use of PTFE in many applications combines it efficacy across 2-3 metrics.

It has been our experience that most clients – even after being presented with alternatives, have continued with PTFE – even at the higher price. Given the facts we have presented above, it is not difficult to see why this would be so.

In case you wish to explore the properties of PTFE further, do visit us at: www.polyfluoroltd.com

Note: Above values are indicative an intended mainly for comparison between polymers