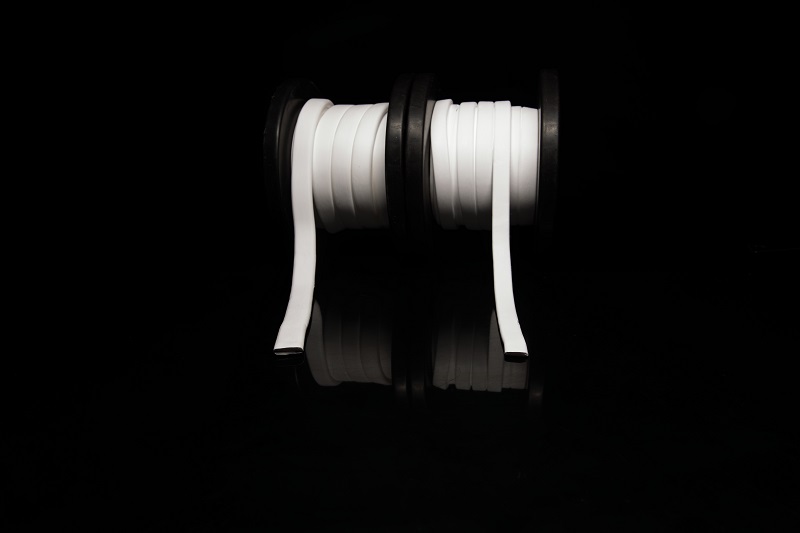 The challenges thrown by PTFE as a material are myriad. As we have already illustrated in various articles, the processing techniques needed for PTFE differ from those of other polymers so dramatically, that nearly every end-product requires a special-purpose machine that can be used for no other plastic. The main reason for this is that PTFE is not melt-processable. As a result, heating the polymer into a liquid state to then either mould or extrude it is not possible. Hence, we end up with processes such as paste extrusion (PTFE Tubes), skiving (PTFE tapes), and isostatic moulding (moulded PTFE parts).

Even within the space of PTFE, expanded PTFE (ePTFE) remains an anomaly in terms of processing complexity. We have covered in earlier articles that ePTFE depends on a minimum of nine different parameters, including the grade of material, the nature of the lubricant, the extrusion process, and the stretching process – to name only a few. Each of these parameters needs to be kept in range, with any deviations only revealed once the final product is out – at which point it is too late to make any changes.

While we have mastered the process of making mono-axial ePTFE gasket tapes – the standard ePTFE tape used in industrial applications – cross-directional tapes are another issue altogether. In this article, we look at the development of the same and what advantages it affords.

The main issue with mono-axial ePTFE gasket tapes is that due to the orientation of the fibrils being in only one direction, the material is susceptible to tearing/splitting when tension is applied in the transverse direction. On the other hand, the material exhibits immense compressibility, allowing it to form a perfect seal with minimal pressure and retain its form over a range of temperatures. As such, the tape works brilliantly in applications such as flange-to-flange connections, where the assembly is not intended to be dismantled frequently, once installed.

However, in applications where the frequent opening of the system occurs, the mono-axial tapes fail over the medium-long term. For example, using mono-axial tape along the rim of a vessel that is opened multiple times a day would not work, since the constant application and relaxation of pressure would cause the fibrils to come loose and the tape to slowly disintegrate. Furthermore, with very poor recovery – mono-axial tape is soft but lacks elasticity – the seal becomes less effective each time the lid is closed and opened again.

To remedy this, we set out to create a cross-directional tape that would allow for strength in the transverse direction and be ideal in applications where recovery was needed. Within the industry, there are already ePTFE sheets that are made using multi-directional ePTFE layers. However, these sheets are prohibitively expensive, come in standard sizes of only 1.5mt x 1.5mt, and do not incorporate any fillers. The aim was to:

As the table above shows, the results were rather impressive. While the exact process remains proprietary, the use of special mixing techniques along with calendaring, drying, layering, and curing resulted in an enhancement of properties. The tensile strength was high in both lateral and longitudinal directions. Compressibility was understandably reduced, but the improvement in recovery meant that the material could be used in areas where pressures were erratic. Most importantly, with strength in both directions, there is no chance of any disintegration in the longer term.

By modifying the process slightly, we can influence the compressibility, thickness, and density. Further, the addition of fillers greatly arrests the cold flow of the material, meaning that long term application is more stable, as there is no risk of excess deformation slowly affecting the sealing effectiveness of a gasket.