Despite extensive research into a new product, we are often introduced to applications that we had perhaps not considered and which open a whole new avenue of possibilities for the item in question.

Given the sheer versatility of ePTFE as a material for sealing, filtration, vibration dampening, and corrosion protection, it came as little surprise to us to learn that its electrical properties open up applications into the cabling industry.

ePTFE or Expanded PTFE is a variation of pure or solid PTFE. The material is processed in a way that infuses air into the solid PTFE to give it a spongy, malleable texture that makes it a preferred material for sealing applications. The same texture – being comprised of 70% air, also lends itself to vastly improving electrical conductivity and dielectric strength.

We already know the properties of pure PTFE in electrical applications make it an insulator of unparalleled effectiveness. The invention of ePTFE resulted in a material that was up to ten times lighter and nearly halved the dielectric constant from 2.1 to 1.3.

So while many high-performance cables use solid PTFE (by way of paste extruding PTFE tube on to a conductive core), wrapping the core in ePTFE offers added possibilities in cabling.

ePTFE insulator tape can be made with tightly controlled thicknesses of as little as 0.05mm, with a uniform density, and dielectric constant. Wrapping individual conductors in ePTFE can cut interference, noise, cross-talk, and signal attenuation. In some applications, ePTFE tape helps limit phase shift to 4.3° and signal attenuation to 0.05 dB at 110 GHz.

High-dielectric ePTFE insulation can be up to 50% thinner than other materials.

At higher voltages, corona discharge also becomes a concern. We have modified PTFE for better performance in wires carrying 5 kV and higher voltages. Corona-resistant (CR) PTFE eliminates the microscopic voids between conductor and insulation that can be corona- discharge initiation sites, especially in high-altitude, military, and space applications.

Shielding is the furthest from the cable’s neutral axis, so it sees the greatest flexure stress. Cutting shield-to-conductor and shield-to-jacket friction deters heat generation and keeps stress off the shield.

Placing ePTFE binders on either side of the shield (with coefficients of friction as low as 0.02) lets each conductor slide past its neighbors and the outer shield with ease, making the cable as a whole more flexible in rotation and torque, and eliminating internal abrasion. Designers who know a cable will not lose strength over time through abrasion can tighten the design envelope and still extend cable life. 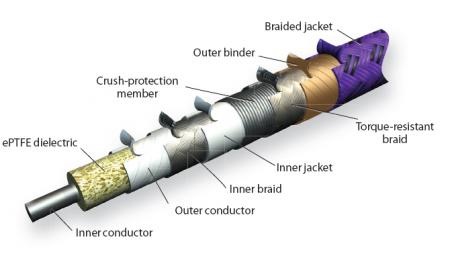 Any cable jacket must protect the shields and conductors from the environment and lend extra tensile and flexural strength. Like conductor insulators, jacket layers should be thin, resist tears, withstand fluid attack, and have high tensile strength.

Many applications use durable polyurethane (PU) jackets. For environments that require low particulation, polyvinylchloride (PVC) may be a better choice.

Jackets can also be made of ePTFE for additional insulation and resistance to chemical attack. If the cable assembly slides through other machine parts, abrasion-resistant ePTFE is a good choice for extending cable life.

The advancements in ePTFE manufacture allow for uniformly thick tapes in running lengths of over 1000 meters. This opens up a world of possibilities for cable manufacture that is only now being harnessed around the world.